While on a recent visit to Australia, I spent a couple of days hiking around the Blue Mountains National Park. The 267,954-hectare (662,130-acre) national park is situated approximately 80 km/50 miles west of Sydney, and takes about 2 hours to get there from the captial. I took a rental car out there, but you can also take the train (which I understand has some great views along the journey).

The park boundary is quite irregular as it is broken up by many roads, small towns and farms. Also, despite the name ‘mountains’, this area is actually an uplifted plateau, dissected by a number of larger rivers. The highest point in the park is Mount Werong at 1,215 metres (3,986 ft) above sea level; while the lowest point is on the Nepean River at 20 metres (66 ft) above sea level as it leaves the park.

The Blue Mountains National Park is one of the most popular national parks in Australia. The majority of tourists to the Blue Mountains see the national park from one of the many lookouts between Wentworth Falls and Blackheath, and many of these never actually set foot in the park ie they don’t go hiking through the bush walks & do a majority of their sight-seeing from the main lookout points. I wanted to see the ‘real’ bushland, so I put on my backpack and hiking gear and ventured deep into the heart of the bushland.

There have been a number of stories on the news about British backpackers going ‘missing‘ in the Blue Mountains, so I wanted to make sure I was prepared and didn’t get lost myself! Especially as I don’t have the greatest record with navigation when it comes to mountains! 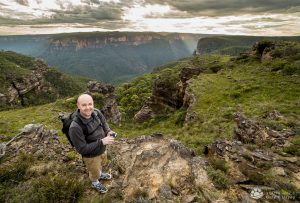 Consequently, I did a lot of research on the area and came across this fantastic photo guide by Gary Hayes. His guide is aimed at new or visiting photographers to the Blue Mountains area to help them find good locations for their photography who have limited time, on single sunrise or sunset visits or longer multi-day trips. Some locations are very easy and/or iconic, others require long walks and drives and as such are much less photographed. Each location has some stunning photos by Gary as well as a grading system, which highlights how easy it is to get to each spot. Being adventurous, I opted for some of the more difficult hikes. Armed with the directions from Gary’s guide, I was able to easily navigate through the bushland with relative ease. I can honestly say it’s one of the most beautiful places I’ve ever seen. It was like walking through the Garden of Eden!

Additionally, I sent Gary a speculative email (last minute) asking if he was free and fancied meeting up. It’s always nice to meet fellow photographers, even more so with such great knowledge of the local area. I saw on his website that he runs regular workshops and tours. To my pleasant surprise, I got an immediate response and we met up the following day. I found Gary to be very accommodating. We met up at Govett’s Leap and he drove me around to several different spots, including Mount Banks (one of the highest points in the mountains at over 1000m above sea level) for sunset.

I really enjoyed my visit & hope I get to return one day. Here’s a few of my shots that I captured during my time there…