My Photo – On the Map 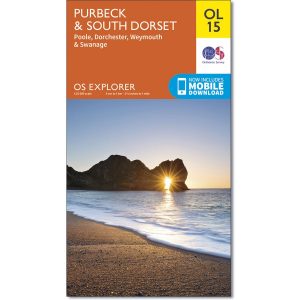 You know when people sometimes say an event or achievement will put a place ‘on the map’…. Well one of my photos is actually now on the map. Literally!

Ordnance Survey launched their OS Photofit competition at the beginning of this year and I submitted a few entries. I learned recently that my Durdle Door photo was shortlisted by the public and then chosen by a panel of judges to feature on their first phase of the newly branded OS Explorer Outdoor Leisure (OL) maps. These were published and launched today. Specifically, my photo is on the cover of the OL15 Purbeck & South Dorset map. You can order these direct from OS or from Amazon and other online retailers.

The Ordnance Survey OL range features 62 different titles covering the most popular areas in Great Britain and all of our National Parks. Because of the popularity of walks along the Jurassic Coast, the Purbeck & South Dorset map is one of their biggest sellers in the whole country. I’m delighted that my image will be seen by so many people.

I had planned to take this shot for well over a year. The sun only rises through the archway itself for a few weeks of the year either side of the winter solstice (when it’s really far south). So I planned the time/date along with the weather conditions and set off from home at 3:30am with a 5 hour round-trip to my destination on Sat 6th Dec 2014 with 2 photographer friends, Stephen and Mark.

When we arrived in Lulworth Cove, just after 6am, the moon had just disappeared behind the cliffs behind us. So we navigated our way down the treacherous steps in near-darkness (luckily Mark had a head torch as I wasn’t quite as well prepared)! The steps down to the beachfront have eroded away and the loose stones and rocks can be a challenge to navigate in daylight, let alone in pitch-black darkness!

We were very early for sunrise, with well over an hour & a half to get setup on the beach, work out all our camera settings and choose our composition (angle of shot). The TPE navigation app on my phone came in very handy as I calculated the approximate spot on the beach to stand as the sun came above the horizon. Of course, these apps aren’t 100% accurate and as the sun eventually appeared (just after 7:52am) I hurriedly shuffled a few yards to my left (along with about half a dozen other photographers) as we all quickly adjusted and re-composed our shots. I have to give credit to Stephen for the composition tip. He advised me that the little remnant of chalk from the cliffs would make a good addition to the foreground & needless to say, I’m very pleased with the final result.

Durdle Door: Western Daily PressTo-date, this has been my most successful shot I’ve ever taken. It appeared in multiple national newspapers (Daily Express, The Times, The Mirror) as well as on the front page (and a double centre-page spread) in The Western Daily Press (pictured). It also featured in TGO Magazine as well as several local Dorset publications. It has been my best selling print as a result of all the publicity.

Despite all the media attention and press, having one of my images appear on the cover of the OS Map is my most prized and satisfying publication. Maps are highly collectable and a very special possession to many. My image will travel all over the world in print and will be around a lot longer than me, my children and grandchildren will be…